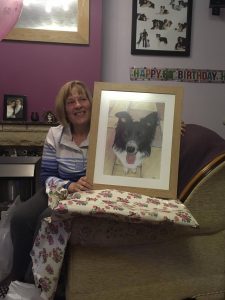 We chose a photo from when we first had Ginny to show her puppyish features, the main enduring one we wanted to capture was her long tongue.  We did take some more photos especially for the pastel portrait but because Ginny had had an operation she wasn’t running around and therefore her tongue was not
hanging out. So although the photo we chose wasn’t the best quality, Susan understood that we really wanted to show her tongue.

Our portrait of Ginny was a surprise for my wife’s 60th birthday, so my daughter and I were in on the secret and we were both really pleased with the result.  Susan has absolutely captured Ginny’s character and it definitely shows her cheekiness.

It was really nice to see the evolution from sketch to final portrait and we had the opportunity to discuss the details of her fur, eyes and nose markings.  We asked Sue to take care of the framing with non-reflective glass and a frame to match our decor.

My wife was absolutely delighted with the portrait and I would highly recommend Susan to my friends and family.