Portrait of Holly the Kitten 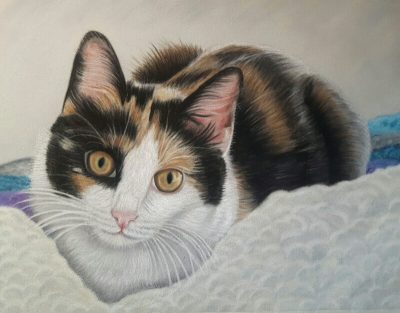 I asked Sue to paint a portrait of my daughter’s cat Holly for a Christmas present. The photos were taken when Holly was a kitten and I wanted something to remind my daughter of when she was small. I took some extra ones to allow Sue to capture the detailed colouring of Holly’s eyes which are quite unusual.

I was delighted the first time I saw a photo of the portrait and when I saw it in real life as it really captures Holly well. My daughter and her boyfriend loved the portrait and commented immediately on how well you have captured all the colours in her eyes and fur. They were so happy the portrait was up on the wall within half an hour of receiving it.  Sue also framed it for me so it was so easy just to collect and wrap straight away.

The portrait has captured Holly really well, it is a very true likeness and really captures the essence of the little mischief she is. The original photo was taken when she was resting on the sofa in between playing with her toys and jumping all over the furniture.

I was kept up to date with progress at all times and Sue was very flexible in arrangements for me to collect the portrait. Our family loved it and remarked on the level of detail captured.  We would definitely recommend you Sue, you have an amazing talent, are very friendly and easy to work with.

I’m so glad I took the time to chase Holly round getting the extra photos of her eyes; this has really made the portrait special and was the first thing my daughter noticed when she saw it. We had a good giggle about the weekend in September when I seemed obsessed with photographing the cat!!